At approximately 20:00 hrs local time on Monday, 28 March 2022, a train travelling from Abuja to Kaduna was attacked in a complex attack using an improvised explosive device to bring the train to a halt, followed by the use of small arms fire and a subsequent boarding of the train by the attackers.

The attack took place between Dutse village in the Chikun Local Government Area (LGA) south of Rigasa Station and north of Katari in Kaduna state approximately 45 minutes out from the Rigasa terminal in Kaduna.  Reports indicate an unconfirmed but significant number of people were killed by the attackers including the train driver.  An unknown number of passengers were also abducted and taken into the bush.  Numerous videos and eyewitness accounts of the event have been posted on social media, which show the incident to be very violent in nature with the attackers firing indiscriminately into carriages packed with people. 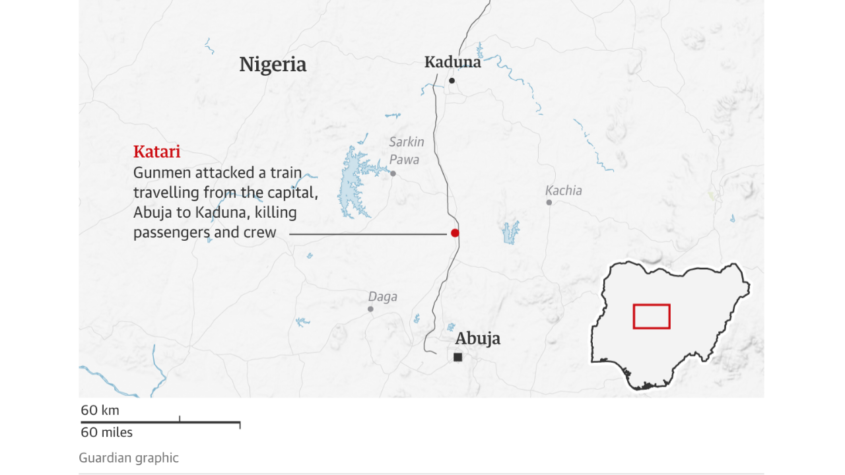 According to eyewitness accounts, the locomotive passed over the explosive device which then detonated under two carriages full of people.  Once the train was halted, the attackers killed the driver and entered the train.  They moved through some carriages firing randomly into the passengers.  Anecdotal information indicates the attackers also shot people trying to run away from the scene.  Among the fatalities was an unnamed member of staff from the Nigerian Airspace Management Agency (NAMA) and a female doctor who was due to emigrate from Nigeria on 01 April.  She tweeted that she had been shot in the abdomen and asked people to pray for her.  It was later confirmed that she died from her injuries. 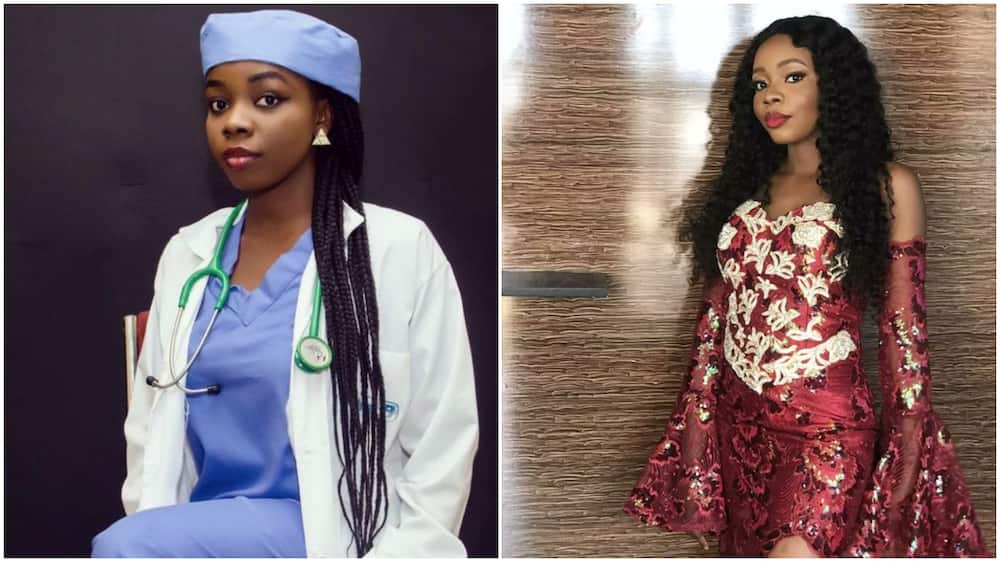 The train, which was carrying at least 970 passengers, had an armed detachment of Nigerian soldiers on board and this armed detachment reportedly confronted the attackers until they (the soldiers) ran out of ammunition, at which point they surrendered.  Other security forces reportedly didn’t arrive at the scene for almost three hours, by which time a number of passengers had been abducted by the attackers.  The security forces marshalled the surviving passengers together and marched them to waiting buses on a nearby road, from where they were moved into Kaduna, reportedly arriving at around 03:00 hours on 29 March.

The following morning the Kaduna State Commissioner in charge of Internal Security, Samuel Aruwa, stated that security forces had taken control of the scene and that passengers who had fled the train in the night had been rescued from the adjacent forests and rocky outcrops where they had sought safety during and after the attack (noting that this has not been confirmed yet by other sources).

Kaduna State is becoming increasingly lawless, with numerous attacks on rural communities resulting in dozens of deaths and abductions.  For example on Sunday, 20 March 2022, 36 people were killed and more than 200 houses burnt in an attack on 4 communities in Kaura Local Government Area (LGA) of the state.  More recently, on Friday, 25 March, 50 people were reportedly killed when armed men invaded 9 communities in Giwa LGA.

Perhaps most concerningly, this train attack comes just days after as many as 200 armed men on motorcycles breached the perimeter of the Kaduna airport in daylight hours, killing a security guard.

This recent attack on the rail line further limits the means by which travellers can transit between Abuja and Kaduna with the parallel road route already considered as very high risk.  Indeed, reports indicate that even people travelling with armed protection teams are not safe from attacks by armed groups and kidnappers, who frequently pose as members of the security forces and who have even established their own illegal vehicle checkpoints from which they rob, rape and abduct travellers.  This apparently intractable problem is what has driven many travellers to use the train line instead of risking the road route.

This recent attack on a train line is not the first.  In October 2021, passengers were left stranded in the bush when a train was stopped due to the tracks between Dutse and Rijana being destroyed by an explosion. The attack also damaged the fuel tank of the locomotive and damaged the windscreen of the driver’s compartment. No fatalities were reported, but passengers were left stranded without security. The line was reopened after a two-day interruption of services with media reports claiming that the attack was carried out by members of Islamic State in the West African Provinces (ISWAP) and Ansaru.  On 22 October, media reported that the security forces had been in possession of intelligence two days prior to the attack forewarning of a threat to the railway, but the security forces failed to act on the intelligence thus enabling the attackers to carry out their plan. Later, on 12 November, in a wide-ranging review of internal security operations around the country, The Chief of Army Staff, Lt. Gen. Faruk Yahaya, announced the deployment of troops and Nigerian Air Force helicopters to patrol the route of the railway.

The north-west of Nigeria is now considered the most unstable area of the country, with kidnappings and community invasions occurring more frequently and involving more fatalities than any of the other geopolitical regions of the country.  It is estimated that armed groups numbering up to 30,000 operate out of rural areas and have gained control of villages and parts of the countryside in Zamfara, Sokoto, Katsina, Niger, Kaduna and Kebbi states. The situation in the region and elsewhere in the country drove the Northern Advocacy for Peace (NAP) movement on Wednesday 23 March 2022 to call on President Muhammadu Buhari to immediately sack the service chiefs over the resurgence of bandit attacks on communities in the region.

The increasing violence of the attacks in the region are an indication that at least some of the bandits are receiving training and support from ISWAP in the north-east of the country.  The increasing frequency of attacks within a 150-mile radius of the capital is of great concern and potentially signals a similar increase in violence in the mid-belt states in coming months.  Worryingly, the north-west is now reported to be home to several different elements of Islamist groups including Islamic State in the Greater Sahara (ISGS); Jama’at Nusrat al Islam wal Muslimin (JNIM); Al Qaida in the Islamic Maghreb; a splinter of Boko Haram popularly referred to as ISWAP; and the Fulani herdsmen of West Africa.

Frustratingly for the Federal Government of Nigeria, the issue of security for the rail line had already previously reached the attention of the Nigerian House of Representatives, who just 6 days before this latest attack was debating solutions to the security challenges facing the line, including considering building a $500 million fence along the line’s route to keep people away from the line.  In a statement they said, “The House is aware that the Abuja-Kaduna Railway is a standard gauge that runs through nine Stations from Idu Station to Kuchibon, Asham, Jere, Gidan, Rijana, Dutse, Kakau and terminates at Rigasa in Kaduna. The House is also aware of the need to provide perimeter fencing to avoid accidents that could arise from human beings or animals crossing rail tracks and install a digital security system to enable the operators to know when there is an impact on the rail, and consequently get the needed help”.  The statement went on to say that the aim of the fence was to prevent vandals and wildlife from endangering the operations of the railway and also to mitigate the threats posed by angry communities along the line’s route.  Additional to this, on 06 January 2022, the Federal Ministry of Transportation also commissioned six patrol vehicles to support the operations of the Nigerian Security and Civil Defence Corps and the Transport Police of the NRC in an effort to increase the level of security on the rail line.  It also announced that it has been looking at surveillance apparatus and fibre optic equipment to further improve security.

It is too early to say whether the railway is becoming a strategic target for Islamist groups in the north of the country, however, it is, without doubt, an important commercial artery connecting the capital with Kaduna – often regarded as the gateway to the North.  The sustained, high-level interest in the security of the rail link between the two cities is testament to its commercial importance and the volumes of freight and the number of passengers using the route will continue to make the line a prime target for attack. It is also likely that the line will now take on a political significance as opponents and critics of the President seek to capitalise on this high-profile attack that calls into question his leadership.  Indeed, as we enter the 12-month point before the 2023 elections, security is sure to once again become a hot topic politically and this latest attack will certainly not help the ruling party’s chances at re-election.

With regards to the attackers they are sure to be emboldened by their success, and after their attack at Kaduna airport last week, it is possible they will seek to mount ever more daring attacks against political and commercial targets in the north in the future.  Sadly, as ever, it will be ordinary Nigerians who will feel the greatest impact of such attacks. 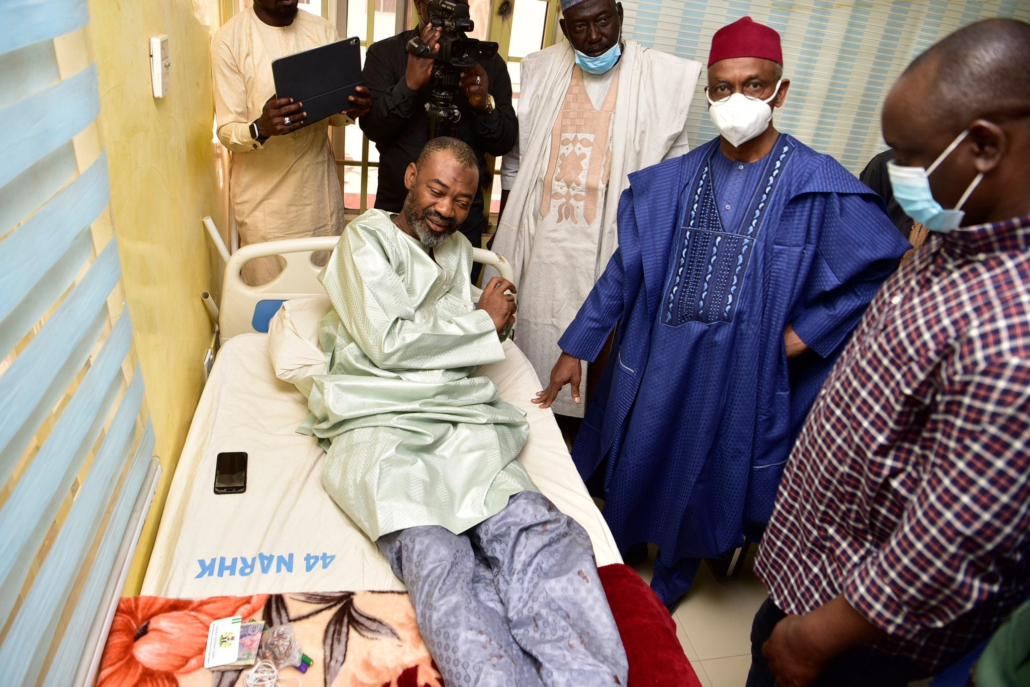 Within 24 hours of this Deep Dive being written, and as predicted above, the gangs of armed men in Kaduna State have mounted further attacks and operations along the major transport axis between Abuja and Kaduna.

On 29 March, a group of armed men attacked Gidan Railway Station along the Abuja-Kaduna railway line. Gidan is located south of the location of the attack the previous evening.  Unconfirmed reports attributed to a senior railway union person, explosives were once again laid on the line, forcing the southbound train to halt.  There are no reports that the attackers then boarded the train or whether they were still present when the train arrived.

In a separate incident, on the morning of 29 March, gunmen blocked the Abuja-Kaduna expressway, in the vicinity of Gawu Village (unlocated), which is in Niger State.  They reportedly abducted a significant number of motorists and killed six Nigerian Army soldiers from Zuma Barracks in Suleja as they moved into the area in response to the incident.

In further news about the impact of the attack on 28 March on the Abuja-Kaduna train, it emerged that Muhammad Amin Mahmood, a candidate for the Northwest Zonal Youth Leadership in the recent National Convention of the All Progressives Congress (APC), was shot during the attack.

Other notable victims included the Secretary-General of the Trade Union Congress (TUC), Barrister Musa Lawal Ozigi, who was among the eight killed and 25 injured confirmed by Transportation Minister, Rotimi Amaechi on 29 March.  Other reports indicate that the death toll is nine people.

A former deputy governor of Zamfara State, Malam Ibrahim Wakkala, also sustained a gunshot wound to the leg, while the Managing Director of the Bank of the Agriculture (BoA), Alwan Ali Hassan, and his niece, were reported to be among the passengers missing from the train.

The attackers have been described by passengers as being young boys between 18 and 20 years of age.  They were also said to have been wearing turbans and “didn’t look like Nigerians”.  They were reportedly shouting “Allahu akbar” during the attack.