For the last three months, most of Nigeria’s domestic mainstream media, as well as social media, have carried stories of the escalating flooding crisis that has engulfed large areas of 34 of the country’s 36 states and Federal Capital Territory.

While flooding is almost an annual event (the following map shows those areas affected by historical flooding events), the events of 2022 have occurred on a scale not witnessed since 2012. 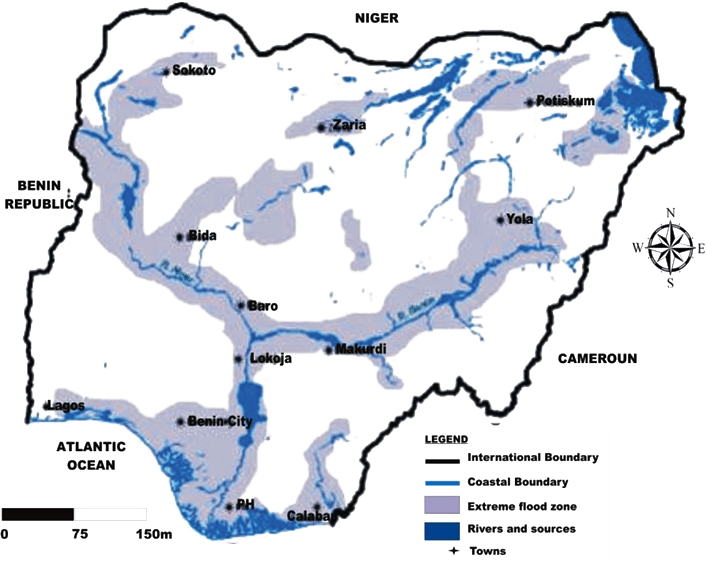 The following before and after satellite photos show the impact of the flooding in the area of Lokoja at the confluence of the Niger and Benue Rivers. 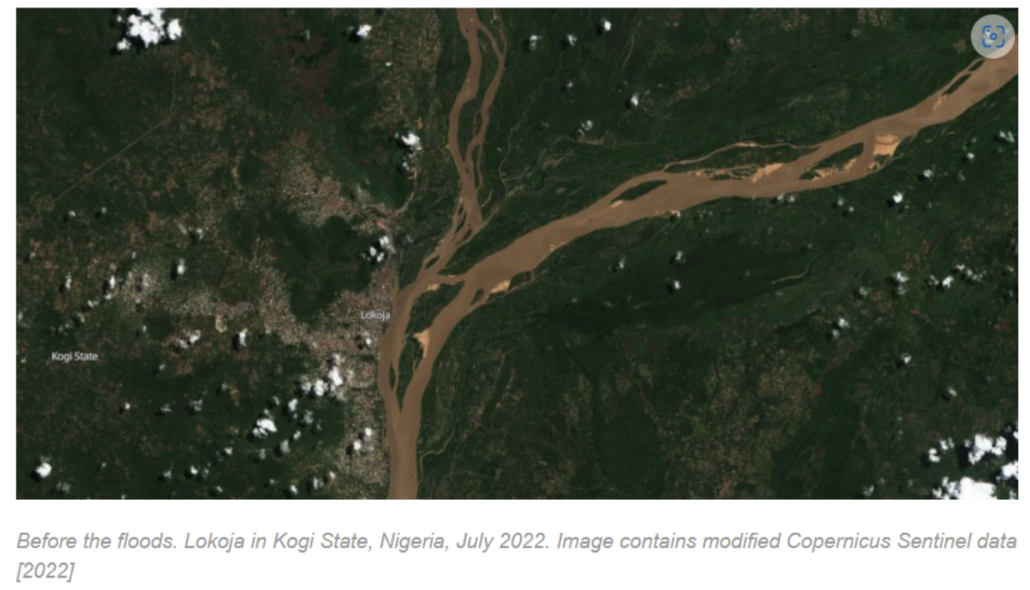 The causes of the annual inundation of flood plains and the communities that farm them generally stem from poor implementation of environmental management and inadequate infrastructure.  Nigerian authorities say the causes of this year’s excessive flooding are twofold:

Earlier in October, Nigeria’s National Emergency Management Agency (NEMA) warned of catastrophic flooding for states through which the Niger and Benue rivers flow.  It is expected that flooding will persist through November for the southern states of Anambra, Delta, Rivers, Cross River and Bayelsa, and three of Nigeria’s reservoirs, Kainji, Jebba, and Shiroro, are expected to overflow.

The minister of Humanitarian Affairs, Disaster Management and Social Development, Sadiya Umar Farouq, revealed mid-October that about 82,053 houses had been totally decimated, 2,504,095 million persons had been affected, and 332, 327 hectares of land were completely damaged

The flooding, which began in the early summer, has:

The floods are a humanitarian disaster and may also heavily impact security in the region.  According to the State Emergency Management Agency (SEMA) of the north-eastern states of Borno, Adamawa and Yobe at the end of October, more than forty-three thousand people in 26 Local Government Areas (LGA) have been affected by flooding since the beginning of the rainy season, including the reporting of 7,485 cases of cholera. 4,347 people have been displaced, with the elderly, women and children most affected.

These Internally Displaced Persons (IDPs) have taken refuge in communal buildings such as schools in areas adjacent to the affected areas. Tounga and Fufore LGAs in Adamawa state and Gujba, Geidam, and Gulani LGA in Yobe state have been the most affected areas by the floods according to one NGO.

IDPs in the flood-prone regions who were already using makeshift shelters or sleeping outside are identified as the most vulnerable and NGOs and relief operations mounted by State emergency management authorities are being ramped up with funding from several sources, including the Nigeria Humanitarian Fund.

The Rivers State government has reportedly allocated 1 billion Naira for relief operations but nevertheless, across the country, at the end of October less than 40% of people affected by the disaster had received any food assistance, leading authorities to warn of victims resorting to “negative coping strategies” – criminal behaviour triggered by desperation and the urge to survive.

Further deliveries of relief food & packages have been made in the last few weeks, but some local groups have called for further transparency in its distribution.

Anecdotal information from within Nigeria indicates that: Nigerians making their way through floodwaters after heavy rainfall in Hadejia, Jigawa State on Sept. 19.

Other impacts from media reporting include:

The flooding has the potential to seriously dislocate Nigerian society and trigger instability and increased criminality as IDPs seek to survive.  The alleged exploitation of relief efforts for political gain will either win popular support, or, where the perception is that relief funding is being embezzled, trigger protest and unrest.  The government’s handling of this national disaster will potentially have a major impact on the outcome of the 2023 elections as Nigerians seek the support of their state and federal level leaders.